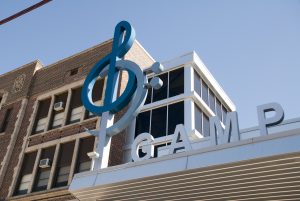 The Girard Academic Music Program was founded in 1974, by former administrator and music educator Dr. Jack Carr, as an alternative program within the Stephen Girard School at 18th and Snyder Avenue.  The program began with one 4th grade and one 5th grade class of approximately 55 students, 2 academic teachers, 1 teacher’s aide, and 1 music teacher/coordinator.  They were the pioneers who initiated the academic and musical success of our school.

From 1974 to 1976, GAMP occupied the Trinity Church Parish House at 18th and Wolf Streets. GAMP then moved to The Armory, which is owned by St. Rita’s church and located at Broad and Wharton Streets from 1976 to 1979. Since 1979, GAMP has used the Edgar Allen Poe School building, which celebrated its centennial anniversary in 2014, located at 22nd and Ritner streets. In 2009, a state of the art theater, gymnasium, and cafeteria were added to the Edgar Allen Poe building.

As one of the first Small Learning Communities, GAMP has grown to its present size to a staff of 35 and over 600 students in grades 5 through 12.  The unique school organization has ALL students as “music majors” providing the framework for the development of a strong academic and musical program.  With a 98 – 100% college acceptance rate among each senior class and scholarships valued at over 1 to 2 million dollars yearly, GAMP continues to grow in stature within the City of Philadelphia.

The philosophy upon which the school was founded in 1974 can best be expressed in the following quotation:

We cannot tolerate another generation
that knows so much about destroying human life,
yet so little about enhancing it.

We cannot permit our children to come into their maturity
as masters of the atom and the gene,
yet ignorant of the ways of the human heart and mind.

We are stardust; we are golden.
We’ve got to get ourselves back to the garden!

The GAMP logo is significant because of the juxtaposition of the treble and bass clefs. The joining of these two clefs symbolizes the coming together of many races, creeds, and cultures to create an aesthetic academic environment through the universal language of music.

O GAMP, so ever dear! Our thoughts are pledged to thee.
On memories’ walls, thou shalt be ever near, no matter where we be.
If fate ordain that we ne’er meet again, this truth we hold be strong:
Our youthful love for GAMP but shall remain as time goes on!

Though years may pass us by, and dreams of now may fade,
Our music will remain with us forever, and the friends we’ve made.
So let our choruses and orchestras resound this fervent song:
Our youthful love for GAMP but shall remain as time goes on!